For the Love of Peas!

Yes Peas! on a mission to launch a new ‘Pea-Moji’ for Great British Pea Week 2019.

To mark the start of Great British Pea Week 2019, a petition has been launched today by the Yes Peas! campaign, in a bid to encourage the Unicode Consortium to consider their proposal for a new pea emoji – dubbed the pea-moji.

With 2019’s new emoji line up featuring an onion, a garlic bulb, and even more obscurely, falafel, the Yes Peas! campaign, run on behalf the British Growers Association in conjunction with Britain’s pea farmers, growers and freezers, is looking to rally up support for a new character and asking that supporters register their interest throughout the dedicated Great British Pea Week (8th– 14thJuly 2019).

Emojis have become central to our methods of communication – according to AdWeek, 92% of online consumers use emojis in their everyday messaging, and this is credited to helping them more accurately express their feelings or sentiments.

A human pea-pod took to the streets of London this morning to highlight the importance of the pea-moji. Holding up a placard to explain the plea of the campaign, the pea-pod set up outside Downing St to alert No.10 to the need for a peamoji. 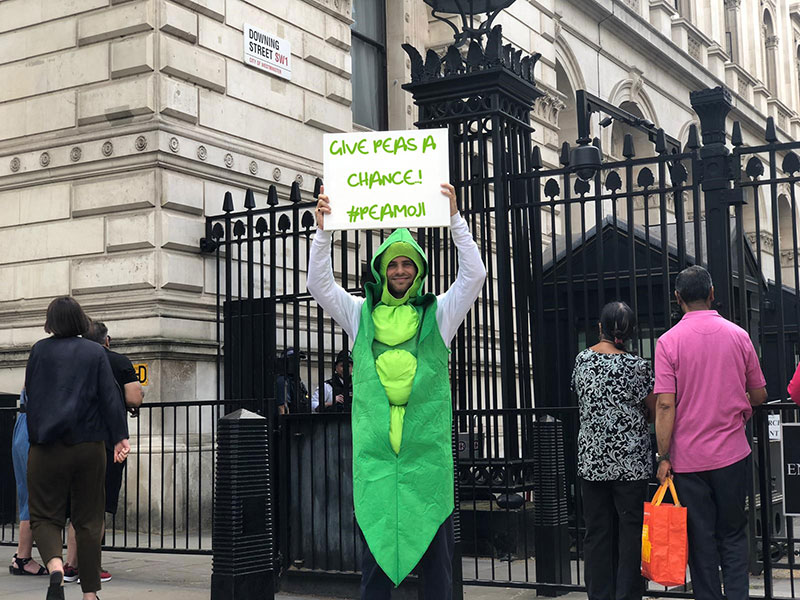 Coral Russell, Crop Associations Manager at the British Growers Association, says: “Other well-loved fruit and vegetables like broccoli, carrots, corn, tomatoes and cucumber have their own emojis, and we’d like to know: why not us?

“As a nation, the UK is 90% self-sufficient in pea production and we are home to over 700 pea farmers – not counting the factory businesses that freeze our peas, the seed houses that provide the pea seeds, and a plethora of other agricultural industries that help us harvest over two billion portions of peas every year. Although the pea harvest itself lasts around six weeks each year, farmers and growers up and down the length of the East Coast will process enough peas to feed the country for a whole year. It’s a huge undertaking, but worth it for one of our favourite vegetables!

“The versatility of the pea is endless – you can use them in everything from soups to smoothies, curries to salads, as well as accompaniments in Sunday roasts or as a hero ingredient for pasta dishes! Because of their provenance, versatility and availability, it only makes sense that we have a pea-moji to represent our love of them.”

Representatives for the Yes Peas! campaign have also highlighted the use of peas in many different ways.

Stephen Francis, Managing Director of Lincolnshire-based Fen Peas Ltd, says: “I work in this industry day in, day out, and it would be fantastic to have an emoji we could use to communicate – it would make everything a lot easier!

“What’s more, everyone likes using peas for a pun – think of how many times it would be used when wishing friends and family a Hap-pea Birthday!”

The Yes Peas! campaign will be submitting their proposal to the Unicode Consortium during Great British Pea Week and hopes to gain signatures from members of the public supporting the campaign throughout the awareness drive.

Hands up if you've been keeping an eye out for the

Whether you're a vegan, veggie, flexitarian or try